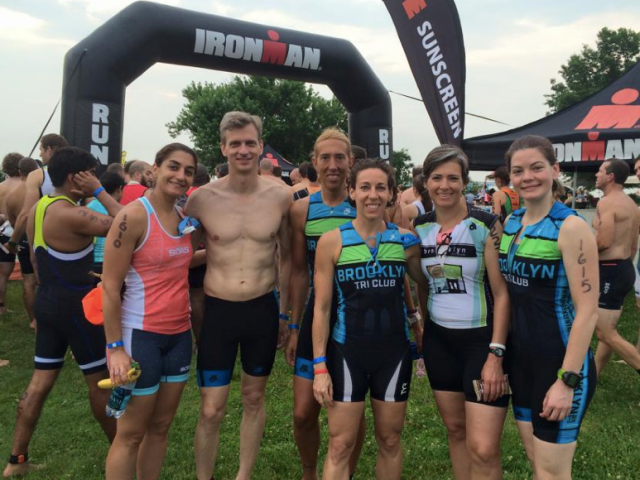 Months before, the sleeping dragon, Eagleman 70.3 appeared not as the majestic bird of prey, but rather a placid feathered sparrow, calmly beckoning our siren trio to the lush marshes of Maryland.

But as our good and true party of three departed the cool atmosphere of modernity that is the Comfort Inn Cambridge, we stepped headlong into the tropical ether and dank, hazy sunrise muttering a collective, “well, shit.” Still as a stalking kestrel awaiting the timid dormouse, the sun’s orb clung to the last vestige of the horizon, ready to attack with the fierce intensity of the Roman fire god Vulcan.

Truly, it was to be a scorcher.

The first of the day’s stalwart swimmers dropped into the drink naked and vulnerable, the lofty officiants having declared the day non-wetsuit-legal. Meanwhile, a swelling throng of matadors awaited their turn in the ring, the shark-tank of the Choptank River of the Delmarva Peninsula.

Our triumvirate having been shuttled into our appointed age-guided factions, we were good and well and truly on our own.

For my part, the coolness of the gentle swells belied the horror that was yet to come. No quick swimmer, I, my head nonetheless calmed by the rhythmic circling of limbs, I raised my eyes at the penultimate buoy and witnessed a frog-marching army wading through the shallow and silty final feet, as the river’s waters became over-shallow.

And on! To the two-wheeled second stage.

The dripping waters of the Choptank, which had only moments earlier had enveloped me as a cool coverlet, now heated in the blazing and relentless infernal sun, becoming rivulets of lava. I mounted my machine, and muttered to no one, “God save us all, God save us!”

Fast and flat, pedal and pedal, ceaselessly in the unforgiving furnace, with no cumulus, nimbus or cirrus in the lapis-lazuli sky. For 20 miles on shoulders of endless gray, flecked with fading hopes and dreams of podium glory, the bone-dry earth and rock radiated heat like a magnifying glass. Fields of stock-still corn, blue cornflower, Queen Anne’s lace, and a lone Great Blue Heron stand sentinel as riders pass, focused on naught but the few feet ahead.

The monotony of road and scenery form an endless loop in my head, pushing me to the brink of sanity with every mile, feet throbbing from constant pedal pressure, shoulders crying for relief. And at mile 40, came the headwind, rushing like the Santa Anas and hot as a forest fire, giving opposition but no relief. No respite!

And then I had to pee.

With temperatures pushing past 95 F, rolling into the second of today’s transitions brought relief and dread, as the final cycled mile took me past legions of walking wounded, downtrodden, trudging red-faced and scorched along the half-marathon path, desperate for water, for ice, for shade, perhaps for the cool embrace of death itself. It seemed worth it to pay Charon’s coin for the possibility of topping over the ferryman’s boat into the at-last cool waters of the Styx itself. And shortly I was to be among them!

But stop. Silence. Then a voice: You don’t have to do this. Yonder lies paradise: a shaded bower, an icy drink, and no line at the massage tent! The choice, murmurs Beezelbub, is none but yours, and yours, and yours alone…

As I threw off the Beast and strapped on my tired sandals (okay, they’re running shoes), I gathered the very last of resolve and took my place among the weary and shuffling as the heat blazed on, the merry sounds of the finish line receding into the distance, now barely a murmur.

But lo! My companions! My mates and compatriots, returning from trials of their own, some worse for wear, but still struggling onwards towards the chute of victory! My soul rejoices that their pain will soon recede as the food tent draws near. And with that final happy satisfaction, I place foot in front of foot, for two hours more, a mere shell of myself.

The last mile of drudgery are a blur of melting pavement, blistered feet and scorching skin, but just as life’s final flame must always be extinguished, so too did my final tribulations come at last to an end, and to a happy reunion with Emily and Danielle, those two souls who did share my relief. And as the three of us reclined under the welcome shade of an elm, an unspoken resolution: Never again, never again.

This entry was posted in Triathlons and tagged eagleman, half iron, maryland. Bookmark the permalink.