Tragedy and Triumph at the 2016 Vermont Marathon 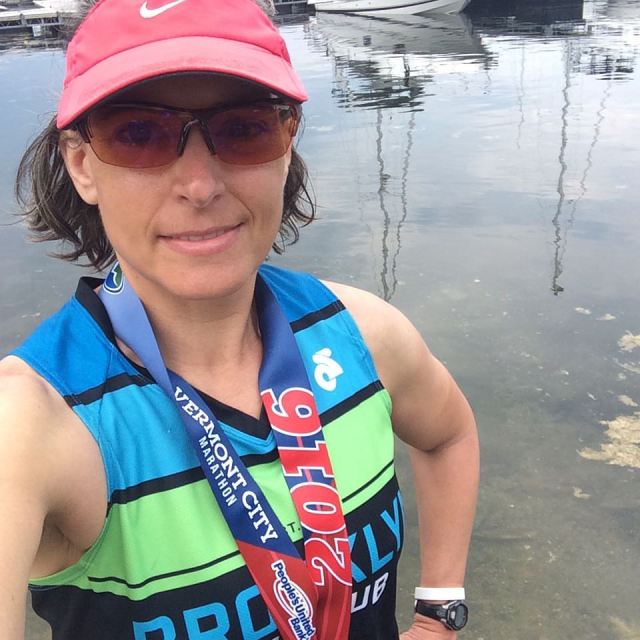 Icing my legs in Lake Champlain

I’ve wanted to run this race for awhile now; I’ve always heard good things about its organization, and Burlington is just a nice little town perched on Lake Champlain surrounded by the Green Mountains.

The risk, of course, with a May 29 marathon is that the weather can literally be anything. “Typically” it’s about 68 degrees on race day, but it’s snowed before, and it had been 80 degrees before.

I’m just going to admit it — this year’s weather was my fault. After the Pittsburgh Marathon four weeks ago, during which it rained for the entire first half, I said to myself at the finish “anything but rain for the next one.” So I guess I got my wish.

The early temperature predictions, about 10 days before the race, looked rainy and in the low 70’s. But as the day grew closer, the rain forecast was dropped and the temp prediction rose to 80…then 82… then 86. The race director began communicating heat warnings and outlined measures being taken: Extra water and ice on the course, and asking local residents to spray down runners. What wasn’t possible, they said, was backing up the 8:00 am start time (already late by marathon standards). Security reasons were cited for this. In retrospect, race directors probably wish they would have worked harder to make that happen.

Hm. I Guess I Need a Plan

After chatting with some Brooklyn Tri Club teammates, I decided to treat this race as the last leg of an Ironman, where the majority of athletes take planned walk breaks during the marathon. That, I reasoned, would allow me to drink a lot more fluids and might keep me from overheating. I brought the usual four gels with me, but had my suspicions that I wouldn’t use them; with the anticipated heat, stomach problems can be an issue.

Next question: What fluids? I was wary of sugar on my stomach in that kind of heat, so Gatorade was out. I settled on carrying a handful of Nuun tablets with me, then plopping them into my handheld water bottle whenever it was empty. (I carry water with me now. It lets me bypass the crowds at most water stations and allows me to take water when I want it.)

Relays: The Future of Marathons

I’m going to call it right now: All marathons will soon offer relay options if they don’t already. I get it: Offering relay options allows race organizers to make a LOT more money, and people who run only 5 miles now get to say they’ve “done” a marathon. For Vermont, there were 2-person and 5-person relay options, and I’d say 2/3 of all participants were part of relay teams.

There are some pluses; it keeps more people on the course. For marathons that include a half option like the New Jersey Marathon and countless others, it feels like the whole day is really about the shorter distance. There’s often more entertainment and many more spectators for the first half of the race, which often includes the ‘best’ scenery. Once the half marathons finish, marathon runners are often on their own for 13.1 more bleak miles with few others on the course. A relay keeps runners on the full marathon course–and that’s more exciting for spectators and volunteers.

But there are downsides too. As a marathon runner, it can get demoralizing to have fresh relay runners blowing past you every 5 miles, but you get used to it. The big downside, as I see it, is lack of experience and etiquette on the part of relay runners. I’ve seen whole families running side by side, blocking the course; there are many walkers, and no one seems to be aware of their surroundings, often stopping, cutting in front of others to access a water station, and otherwise tuned out.

For relay marathons, I think race directors need to spell it out for people: if you’re going to walk, first move to the side of the course (better yet–how about a special start or corral for walkers?). Don’t run more than two people abreast. Glance behind and beside you if you’re going to make a sudden move. Don’t throw your water or Gatorade cup on the person behind you. The race materials assume that runners know these things, and that’s a mistake.

The Course and Race

Packet pickup and expo were easy and unremarkable. There was no goody bag, just your bib and shirt, plus a small expo with the usual stuff.

Race day dawned hazy and humid, with temperatures in the mid-70s. I actually chose not to look at the actual temperature. I didn’t want to obsess about it. Getting to the race start was easy, and I found street parking about a mile from the finish area (I like to walk 15-20 minutes after a race, so I did that deliberately). The start area was well organized, with plenty of toilets and a simple bag drop. The race director gave updates and reminders to hydrate and go slow. Lining up in corrals was straightforward — there was no one checking anything, you just lined up according to your anticipated pace. It would have been easy to bring along a non-racing pacer, if that’s your thing.

The course is interesting, and I can see why the Vermont City Marathon has a reputation for being very spectator-friendly. The first 3/4 of the race consists of three out-and-back sections, all coming back to the center of town, so it would have been easy for family and friends to see their runner at least three or four times. The last 1/4 of the course headed north, then looped around once more to finish on a bike path along Lake Champlain. The dullest section is the second of these out-and-backs, along a highway with few spectators and no shade.

I felt okay starting out. It didn’t seem terribly hot to me at the race start, which was likely around 75 degrees. There were high hazy clouds, so at least the sun wasn’t relentless. I ran the first five miles as planned, then at mile 6 started to take my walk breaks–no more than 60 seconds at each mile marker. And I began taking fluids right away, not waiting until I was thirsty. Having a planned break was especially helpful on the second out and back along the highway, which was sunny and hot, with heat bouncing off the pavement. I imagine by then the temps had crept up to around 82.

After that first 10 miles or so, the rest of the course wound through neighborhoods and business districts, where there was more chance for shade. Vermonters didn’t disappoint: Many had set up sprinklers and hoses, and lots of kids were gleefully offering to shoot you with a water gun. While I appreciated the spritz, I avoided most of these as I didn’t want to get my shoes too wet (hello blisters).

By mile 13 or 14, I knew my hydration plan was working. As anticipated, I just didn’t feel like eating anything. I took one gel at mile 8, and that was it. But taking those walk breaks really allowed me to take in a lot of fluids. I anticipate I drank four liters total during the race. And that short walk break allowed me to run faster. By the half when I passed a timing clock, I was anticipating a 4:30 finish, which would have bettered my Pittsburgh time (four weeks prior) by 10 minutes.

The most memorable part of the course is a big hill (really the only significant hill) at mile 15. At the base of the hill are about 20 Kodo drummers to push you up the hill, along with a lot of spectators. Definitely unique and fun. By mile 16, you’re on your last trip out of the center of town. I was still feeling pretty good. Hot, sure, but my mind was clear, my running form was still good, and I was still sweating well. We ran through several friendly neighborhoods, with folks bringing out all of their furniture to hang out and encourage runners. We swung through a short section of trail, which was a relief from the heat. At that point, I felt like the humidity ticked up a bit, but it didn’t feel any hotter to me than it had an hour before.

So it was a surprise when, at mile 21, volunteers began telling us that the race had been shut down, and the course closed. Medical personal advised people to stop running, and to wait for shuttle buses at the nearby school. But many were ignoring officials, and kept running. At that point, we were entering the final stretch, on a shaded bike path for the final miles. I felt good, and was so close to the finish. Plus, the shady path had to be cooler. So after chatting with medical personnel and police, who said they couldn’t actually force anyone to stop, I continued, along with many others. Most had stopped and were walking, but some kept on running. I moved to the dirt track beside the path to avoid the walkers, and finished the course. I don’t know my time (no watch), and I wasted a fair amount of time in the confusion of the race being shut down.

The finish was in a waterside park, and after crossing the timing mat and receiving a metal, you’re dumped into the usual sort of big field with vendors. The food tent, while substantial by marathon standards, had only bananas for vegans (mainly pizza, chocolate milk, and granola bars with whey in them.)

One HUGE plus: the massage tent was restricted to marathon runners–no relay people allowed! That was a first. Usually the massage tent is packed with people who ran way less than 26.2, so I actually got a post-race massage, a first. After that, I walked down to the water and waded into the lake. With the water at about 55 degrees F, it felt wonderful, and was an easy way to both rinse off and ice down my legs.

Overall, I thought this was a well-run race for my 12th marathon, despite the heat cancellation being a bit of a fiasco. I’m sure the race organizers are kicking themselves about not trying harder to start the race an hour or two earlier, but hindsight is 20/20.

Burlington is a nice place to spend a weekend, with opportunities to get out on the water (I rented a kayak on Saturday), go for a hike, or visit nearby historical sites (I enjoyed the Ethan Allen Homestead. Recommended if you’re looking for a late spring marathon, as long as you can accept the unpredictability of late-May weather.

This entry was posted in Running, Travel. Bookmark the permalink.