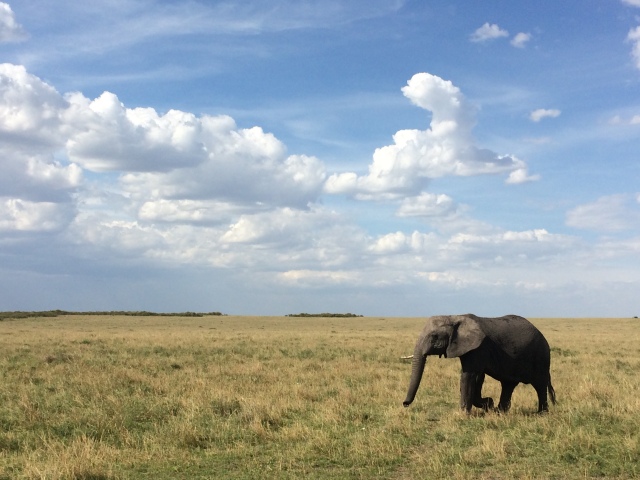 Elephant in the Maasai Mara, Kenya

I’m not a tour group person. In my view, it’s no longer ‘your’ vacation. Rather, you’re stuck with endless compromises, usually to satisfy the grumblers, or the least physically able people in the group. The paradox? It’s really, really hard to tour Kenya without a group, unless you are a person of endless means. Alas, I am not.

This year, I had decided it was finally the year I’d travel to Kenya, but I just didn’t want to be stuck in a safari vehicle with yuppies and their kids, elderly people on a bucket list trip, or honeymooners. I found a few trips geared to young backpackers, and a couple more that offered less expensive camping trips (in an actual tent, not glamping). But even with those trips, the majority of your time in Kenya would be spent driving around in a truck hoping to see animals.

As an active person, I just didn’t think that sitting in a truck for hours on end was what I wanted. But I still wanted to go to Kenya.

After a lot of Google searching, I landed on a tour operator out of Austin called Rogue Expeditions. The group runs small-group tours in Morocco, Patagonia, Croatia, and Kenya. All the trips focus on running. I felt like I’d found my people, and after exchanging a couple of helpful emails with owners Gabe and Allison, I knew this was the trip for me. We’d be running nearly every day over the 10-day trip, exploring the Kenyan landscape and Rift Valley by foot, anywhere from 6 to 18 miles per day, and we’d be visiting Iten, a village at 8,000 feet where the country’s best runners train. As a running junky with 12 marathons under my belt, I could not wait to see the runner’s Mecca for myself. 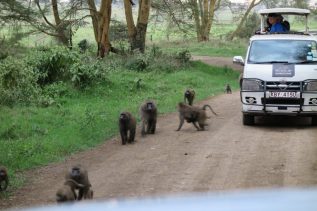 One of our Rogue Expeditions vans with baboon escort

I can’t say enough about Rogue Expeditions. Our group of 11 guests were all very different, and as it turned out, more than half of the group didn’t run at all; they were either injured or accompanying family members. Our guides Gabe and Braz made sure the non-runners were occupied, but still kept a laser focus on the trip’s running-centric itinerary.

My fears of being at the mercy of the group were unfounded. Gabe and Braz gave me plenty of leeway for striking out on my own. I went for some walks around Nairobi, and had a lovely long run (14ish miles) on my own in Iten, along with some pre-dawn walks to see the sunrise and hope to catch some hippos or giraffe.

All along the trip, were were joined by local guides. One of our drivers, Meli, seemed to know everything about wildlife. Our local guide George was a cultural expert, and a running and sports enthusiast himself. I spent many hours talking politics with the two of them (I found that Kenyans love to talk about politics). And on each of our runs, we were joined by local elite runners. 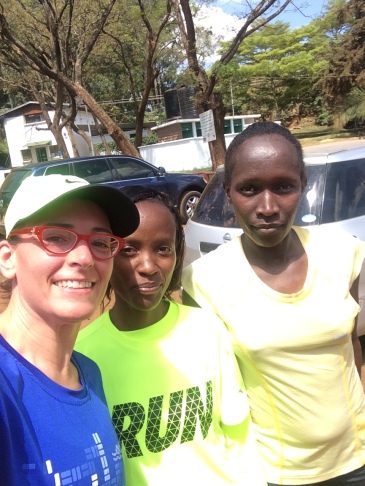 Me, Purity and Veronica

I especially enjoyed meeting Purity and Veronica. We chatted for hours in the back of the bus, sharing pictures of our families. I’m sure they got tired of me asking about their training regimen and nutrition. Then again, maybe they were glad to meeting someone else who loves to talk about running. Purity plans to run the Los Angeles Marathon in 2017. I also spent a lot of time with Reuben; we bonded like long-lost siblings. Reuben runs a 2:07 marathon (the world record is just under 2:03). It was such a joy to be immersed in the local running culture, and if I’d taken any other tour, I would have never met these great people.

The Rogue Expeditions website has details on travel itinerary and locations, but I found this to be a wonderfully balanced 10 days, with equal amounts running, local culture, and of course spectacular scenery and amazing safari animals. Peppered through our days were game drives where we saw thousands of zebra, buffalo and wildebeest; hundreds of gazelle, antelope, monkeys and baboons; dozens of elephants (including babies!), hippos, and several giraffe, lions, leopards and cheetah (and one rhino).

We stayed at comfortable hotels, drank a lot of cold Tusker beer (okay, I think I may have done most of the drinking), and sampled delicious Kenyan foods. Despite occasional curve balls, the Rogue Expeditions team were unflappable. They never failed to anticipate issues and fix them before they got to be a big deal.

I love traveling on my own. My solo trips have always been my favorites, whether bike touring in England’s garden district, or touring vineyards in South Africa. I prefer marching to the beat of my own drummer, but Rogue Expeditions did burst my preconceptions of what a managed tour could be. I can’t recommend them highly enough.

As a solo traveler, I had some concerns about being the ‘odd man out’ but in reality, I think I had the best experience, met so many fascinating people, and had plenty of freedom for making my own agenda. (And the people that stuck solely with the group also seemed to have a great time.)

I’ll leave you with one last photo and one of my favorites. On a solo run in Iten, on a country road, some kids came running out alongside me saying “mzungu! mzungu!” That’s the familiar Swahili term for ‘white person.’ Their smiles were from ear to ear, and I stopped and played with the camera on my phone. They loved seeing their pictures on the screen. Then I ran on, and we waved back at each other. 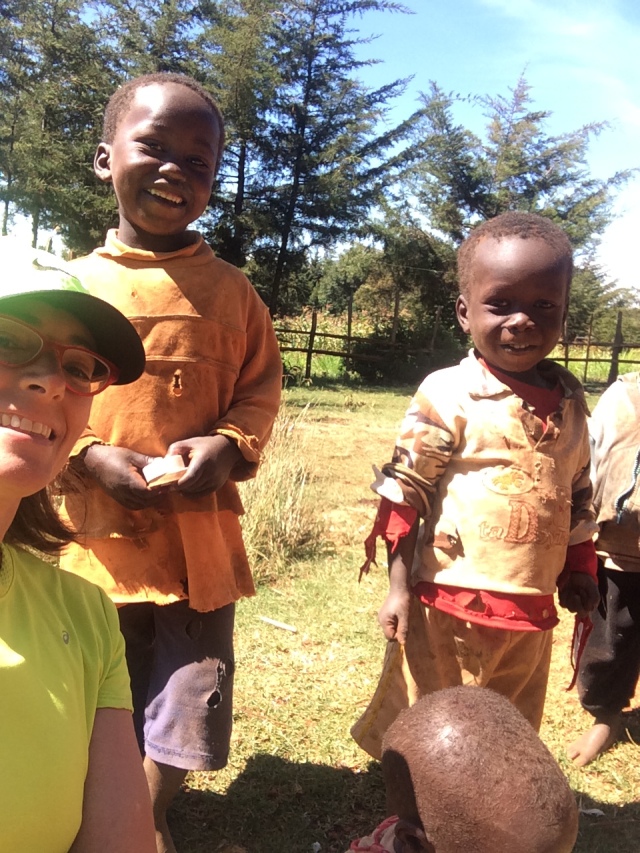 Kids I met on one of my runs in Iten